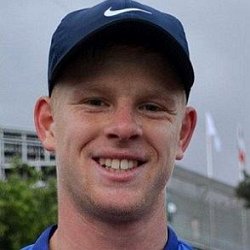 Kyle Edmund (Tennis Player ) was born in Johannesburg, South Africa on a Sunday, January 8, 1995 🎈. Kyle Edmund is 27 years old. He is a Capricorn ♑ and was born in the Year of the Pig 🐖.

Tennis player who won junior Grand Slam doubles titles at the 2012 US Open and the 2013 French Open as well as the 2015 David Cup representing Great Britain as well as. In 2018, he was ranked as the second-best men’s player in Great Britain.

Kyle Edmund is a Tennis Player. Kyle was born in the 1990s, in the middle of the Millennials Generation generation. Millennials are individuals born between 1981 and 1996. This generation is known as being sophisticated, technology-savvy, immune to most traditional marketing and sales pitches. This creative generation is known for heavy usage of the Internet, mobile devices, and social media. Millennials have experienced some of the most important historical events, including, the Great Recession, Gulf War, World Trade Center attacks, and the Iraq War.

His father is from Wales and his mother is from South Africa. Find out who is Kyle Edmund dating right now.

He moved to England at age three and grew up in the village of Tickton. He participated in swimming and cricket before dedicating himself to tennis at age ten.

DID YOU KNOW His Davis Cup team won the 2015 BBC Sports Personality Team of the Year Award.

FACT He has been coached by former player Greg Rusedski.

Currently, Kyle Edmund is 27 years old. His next birthday is away. Kyle will celebrate his 28th birthday on a Sunday, January 8th. He shares a birthday with everyone who was born on January 8, 1995. Below is the countdown to his next birthday.

Kyle Edmund’s zodiac sign is Capricorn. People born between December 22nd and January 19th belong to the tenth sign in the zodiac, Capricorn. Capricorns are known for being one of the hardest workers of the zodiac. They are ambitious, determined, and strong. Virgo is the most compatible sign for Capricorns.

Kyle Edmund is a 27 years old Tennis Player, born in January, in the Year of the Pig (1995), and is a Capricorn. His life path number is 6. Kyle’s birthstone is Garnet, and his birth flower is Carnation. You may also check out all famous birthdays in January or specifically birthdays on January 8.

We will continue to update this page with new Kyle Edmund facts and relevant news. Please get in touch with us if you have a celebrity tip or find a mistake.