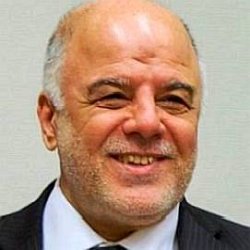 75th Prime Minister of Iraq, member of the Islamic Dawa Party,and former Minister of Communications from 2003 to 2004 during the first government after the United States’ invasion of Iraq and the reign of Saddam Hussein.

Haider Al-Abadi is a Politician. Haider was born in the 1950s, in the middle of the Baby Boomers Generation generation. Baby Boomers are individuals born between 1946 and 1964, during the post World War II baby boom. This generation is known for Rock and Roll, Woodstock, Elvis, the Beatles, miniskirts, and Barbies. Baby boomers have experienced some of the most important historical events, including the JFK Assassination, the Cuban Missile Crisis, the civil rights movement, and the Vietnam War.

He is of Shia Islamic religion and grew up with three brothers. He has three children. Find out who is Haider Al-Abadi dating right now.

He studied electrical engineering in Baghdad and later received a PhD in the same subject from the University of Manchester, England. He joined the Islamic Dawa Party in 1967 and became party leader in 1977 while studying in England. In the early 1980s his brothers, who were still in Baghdad, were arrested for belonging to the party and presumably to strike back at him. His passport was confiscated by the government on the grounds of conspiracy so he remained in voluntary exile until the fall of Saddam Hussein in 2003.

DID YOU KNOW In August 2015, he proposed extensive overhauls to the Iraqi government, which has been wrought with corruption since its instatement after the US invasion in 2003. The overhaul included strict rules on corruption and extensive plans on how to deal with the Islamic State terrorists that is threatening the region. All of this came in response to major civilian protests in the heart of Baghdad.

FACT During the international community’s struggle with the threat of the Islamic State terrorists, he has criticized US president Barack Obama’s methods and edged closer to lining up with the views of Iran and Russian president Vladimir Putin.

Currently, Haider Al-Abadi is 70 years old. His next birthday is away. Haider will celebrate his 71st birthday on a Friday, April 25th. He shares a birthday with everyone who was born on April 25, 1952. Below is the countdown to his next birthday.

Haider Al-Abadi’s zodiac sign is Taurus. People born between the dates of April 20th and May 20th belong to the second sign in the zodiac, Taurus. Taurus are known for being reliable, patient, responsible, and loyal. Cancer & Virgo are the most compatible signs for Taurus.

Haider Al-Abadi is a 70 years old Politician, born in April, in the Year of the Dragon (1952), and is a Taurus. His life path number is 1. Haider’s birthstone is Diamond, and his birth flower is Sweet Pea/Daisy. You may also check out all famous birthdays in April or specifically birthdays on April 25.

We will continue to update this page with new Haider Al-Abadi facts and relevant news. Please get in touch with us if you have a celebrity tip or find a mistake.