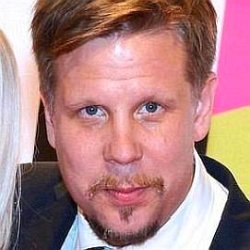 Swedish television personality who first rose to fame as the host of the comedy shows 100 höjdare, Ett herrans liv, and Breaking News med Filip och Fredrik. He is also the screenwriter behind the television series Myggan.

Filip Hammar is a TV Show Host. Filip was born in the 1970s, in the middle of the Generation X generation. Generation X, also known as the "MTV Generation," are individuals born between 1965 and 1980. This generation saw the emergence of music videos, heavy metal, and hip hop. Nirvana, U2, Madonna, torn jeans, Beverly Hills 90210, and Friends also became popular. Gen Xers have also experienced significant events, including, fall of the Berlin Wall, the energy crisis, the Watergate scandal, the rise of the personal computer, and Terrorism at the Munich Olympics.

He married Jennie Carlzon in 2008 and the pair later gave birth to a daughter, Ilse. Find out who is Filip Hammar dating right now.

He got his start in television in 2002 appearing on the hidden camera prank show Ursäkta röran, vi bygger om.

DID YOU KNOW He worked as both co-host and writer for the comedy talk show Boston Tea Party.

FACT Like Ulrika Jonsson, he is a popular Swedish television personality.

Currently, Filip Hammar is 47 years old. His next birthday is away. Filip will celebrate his 48th birthday on a Wednesday, March 26th. He shares a birthday with everyone who was born on March 26, 1975. Below is the countdown to his next birthday.

Filip Hammar’s zodiac sign is Aries. People born between the dates of March 21st and April 19th belong to the first sign in the zodiac, Aries. Aries are known for being ambitious, honest, self-assertive, and brave. Sagittarius is the most compatible sign for Aries.

Filip Hammar is a 47 years old TV Show Host, born in March, in the Year of the Rabbit (1975), and is a Aries. His life path number is 6. Filip’s birthstone is Aquamarine, and his birth flower is Daffodil. You may also check out all famous birthdays in March or specifically birthdays on March 26.

We will continue to update this page with new Filip Hammar facts and relevant news. Please get in touch with us if you have a celebrity tip or find a mistake.