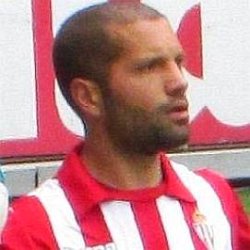 Spanish right back known for being a stalwart on Sporting Gijon’s back line, both in La Liga and the Segunda Division, often leading his team in minutes played.

Alberto Lora is a Soccer Player. Alberto was born in the 1980s, in the middle of the Millennials Generation generation. Millennials are individuals born between 1981 and 1996. This generation is known as being sophisticated, technology-savvy, immune to most traditional marketing and sales pitches. This creative generation is known for heavy usage of the Internet, mobile devices, and social media. Millennials have experienced some of the most important historical events, including, the Great Recession, Gulf War, World Trade Center attacks, and the Iraq War.

He grew up in Mostoles, Spain. Find out who is Alberto Lora dating right now.

He grew up playing with Real Madrid’s youth team but went pro with Sporting Gijon in 2006.

DID YOU KNOW Not known as a two-way player, it took him five seasons with Gijon to score his first goal in La Liga. He was named the team’s Player of the Season in 2010-2011.

FACT He and Roberto Canella have played together on Gijon.

Currently, Alberto Lora is 35 years old. His next birthday is away. Alberto will celebrate his 36th birthday on a Wednesday, March 25th. He shares a birthday with everyone who was born on March 25, 1987. Below is the countdown to his next birthday.

Alberto Lora’s zodiac sign is Aries. People born between the dates of March 21st and April 19th belong to the first sign in the zodiac, Aries. Aries are known for being ambitious, honest, self-assertive, and brave. Sagittarius is the most compatible sign for Aries.

Alberto Lora is a 35 years old Soccer Player, born in March, in the Year of the Rabbit (1987), and is a Aries. His life path number is 8. Alberto’s birthstone is Aquamarine, and his birth flower is Daffodil. You may also check out all famous birthdays in March or specifically birthdays on March 25.

We will continue to update this page with new Alberto Lora facts and relevant news. Please get in touch with us if you have a celebrity tip or find a mistake.